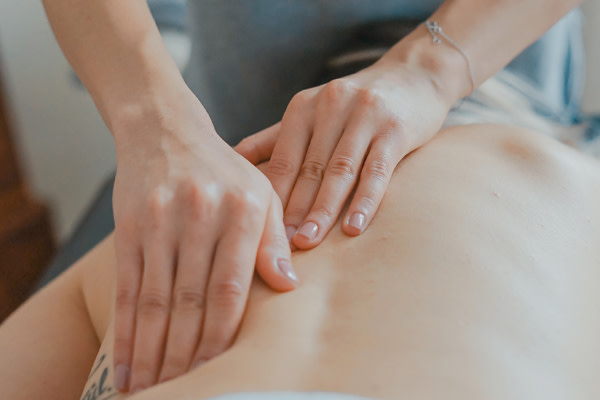 Spa experiences are often written off as superficial, but that can play a really meaningful role in reconnecting with our bodies. Especially when you’ve been going through illnesses like cancer.

It’s not uncommon for someone who has been through chemotherapy and surgery to find themselves crying during a spa treatment. Such is the power of kind and caring touch after the mind and body has been through so much.

This is the moment where you allow yourself to feel human again. Connected with someone else as well as yourself. That connection makes a spa treatment so much more than a physical way to relieve muscle tension. It’s a deeper, more powerful experience.

“As a cancer patient I was so excited to hear that Rockliffe Hall provided spa treatments for cancer sufferers. On the day I went I was around half way through my chemotherapy plan and I timed my visit to coincide with my ‘good days’ prior to the next dose. I had discovered that I had breast cancer in January. I love my clothes, my make-up, my hair and all the girlie things involved in being, or trying to be, a ‘trendy and smart modern day woman’. I’m used to looking after myself but the last year has been challenging to say the least.

Suddenly everything seemed to change, despite being very positive about the final outcome, I became the one to be cared for, not the carer. My body looked and felt strange, and I ceased to feel like a woman. My body seemed not to be my own but simply something that had things done to it which were consistently unpleasant and painful. So imagine my delight at the thought of staying in a five star hotel where I could be the old me, the me who could enjoy the pleasures of a beautiful hotel and beauty treatments, the me who was like everyone else.”

Before I arrived, and adding a valuable element to the trip, one of the health consultants contacted me to understand and learn about my current state of health, my medication, and any other pre and/or post medical situations they may need to be aware of. After the consultation, we decided the best option for me was a Nurturing Body Massage. This was booked on the proviso that once we had met face to face we may decide that a different treatment was more appropriate. We’d picked the right one first time though I’m pleased to say!

I would definitely recommend going with a friend. It was nice to have a break from it all. And even though we were only away for one night, as we were driving back it felt as though we had had a proper rest!

Toni, who went to Pennyhill Park Hotel and Spa

When going for a treatment (reflexology), the therapists did not bat an eye at her carer (her husband Glen) joining her. Even when he nodded off and snored. There was an on-site cinema and more healthy food than anyone could possibly get through. Qualified nurses were also on hand. Vicky and I were able to spend a weekend together with another friend, relaxing, laughing and for just a little while her cancer, if not forgotten, receded ever so slightly into the background.

Katy, who took her friend Vicky to Grayshott Spa

FIND OUT MORE ABOUT SPA BREAKS WHEN YOU HAVE CANCER

Here are just some of the beautiful spa experiences that are inspired by the sea and harness its healing benefits.

Someone once said you can't have it all... well, I don't know what rule book they were working from, but it's not my philosophy - particularly when it comes to golf breaks.