The word ‘mentor’ seems to get overused, but every now and again you come across one who shines out from the crowd. 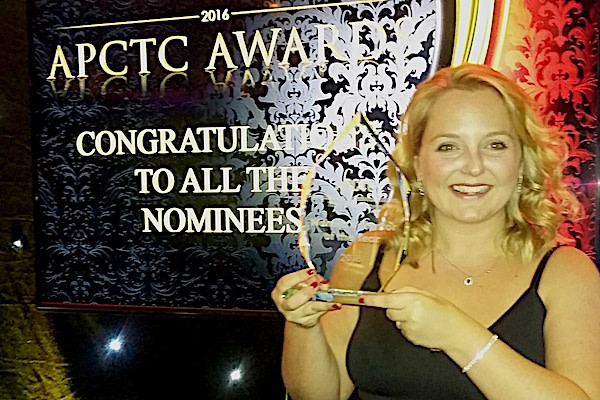 Sinead d’Hora is one such person, which we have known for quite some time, ever since we tried out one of her intuitive massages, but now, thanks to a much deserved award, the rest of the world is getting to know it as well.

At the end of 2016, Sinead won Women’s Mentor of the Year from APCTC, the industry benchmark for coaching, training and consulting. Having only launched the mentoring side of her work six months before, the honour is of particular note, with votes propelling her to the top in a competition against those who have been in the industry for more than 20 years. In context, there were 266 nominees and eight finalists.

So what set her apart?

“They said it was because I was one of the few mentors where they felt they could believe what I was saying,” she says, and in truth, anyone who meets her would probably say the same thing.

The thing about Sinead, is that what she does comes entirely from intuition. It’s pretty tricky to ask her how her practice works, because she isn’t a prescriptive type of person, everything she does is based on the individual - the number of sessions you have, the duration of those sessions, the ‘homework’ you do, and all the bits in between. Whether she gives you a couple of friendly phone calls and text messages during the week to help you on your journey or not - it’s all part of how she reads you.

That said, the basics are thus: it all starts with a 15 minute phone conversation designed for both you and Sinead to figure out whether you’re right for each other, and whether you feel she’s the right mentor for you. From there, depending on where you are, you will have a chat in person or via Skype, and have your first session, which can be anything up to three hours, and the rest goes from there.

Where the magic happens however, is in Sinead’s intuitive approach.

You see, Sinead’s background all stems from a gift for reading people, their energy and what they need. In her therapy work she starts with an intuitive reading, which basically means she asks you not to talk about yourself, she learns everything she needs from your body, it’s energy, and she frequently wows people by being able to tell them things about their lives and how they’re feeling, without them saying a word: “I work based on my intuition, which is what I love; to get that inner fire out of you,” she says.

The girl who started out studying business law (which she loved), but felt that it wasn’t right for her, started studying different therapies, and as her knowledge grew, so too did her intuition. Having allowed the industry to take her on multiple journeys, learning from different people, she is now running her own business, busy with therapy, mentoring, public speaking, seminars and soon, podcasts as well.

All sound a bit too airy?

Sinead loves a sceptic, and frequently comes across them. “I love it!” She says, continuing: “I love the challenge, when people are sceptical. When people come to me for an intuitive reading I tell them not to tell me about them. I will simply read their energy because your words will never tell me what’s wrong but your body and energy will and that brings in trust. So when people are sceptical it’s very rewarding.”

Asking who comes to her and why, Sinead says it’s really everyone, from all walks of life. It’s businessmen who need inspiration, it’s artists in need of a creative boost, it’s teenagers with anxiety, and it’s people who need to find direction in life - no two are the same, and there’s no specific type of person or concern that Sinead busies herself with. She’s a people person!

Who needs a mentor?

There’s one thing I always wonder though when it comes to mentoring - why has this become such a thing? What is going on that so many of us need guidance? Or is it just that we’re happier to say that we need it in the 21st century than at any other moment in history? “I think the pressures from social media, the news, our surroundings, and with everything being so fast paced and so overwhelming, what I find is that people really struggle to connect with someone who understands how they feel,” says Sinead.

“I think it’s often easier to talk to a stranger than it is to talk to friends and family. I have people who have come to me on antidepressants and because I have read their energy and I understand them I can help and now they are off them and doing really well!”

Helping people with everything from setting up a business to relationships and self esteem, what’s completely charming about Sinead’s practice is that she doesn’t dress it up in qualifications or big words. She’s a therapist through and through, an intuitive one at that, and her talent comes in really being able to connect and care for her clients. She’s someone you can really talk to, and that, in a world of likes, shares and online connections, is priceless.

Add an extra touch of feel good factor to your spa break and go green with your swimwear!

We all dream of travelling the world and great adventures, but what’s it like to live some of those fantasies?  TV presenter, Kate McIntyre, talks about some of her favourite travel memories! For as long as I can remember there have only been two things I wanted to do in life after University, work in […]